The Vice-President of the Republic of Côte d'Ivoire, H.E. Tiémoko Meyliet KONÉ, officially inaugurated the second container terminal of the Port of Abidjan on 2 December 2022, in the presence of members of the government, including Mr Amadou KONÉ, Minister of Transport, Mr Hien Yacouba SIÉ, Managing Director of the Autonomous Port of Abidjan, Mr Philippe LABONNE, CEO of Bolloré Africa Logistics, and Mr Frederik KLINKE, Director for Africa at APM Terminals, along with members of Abidjan’s port community. 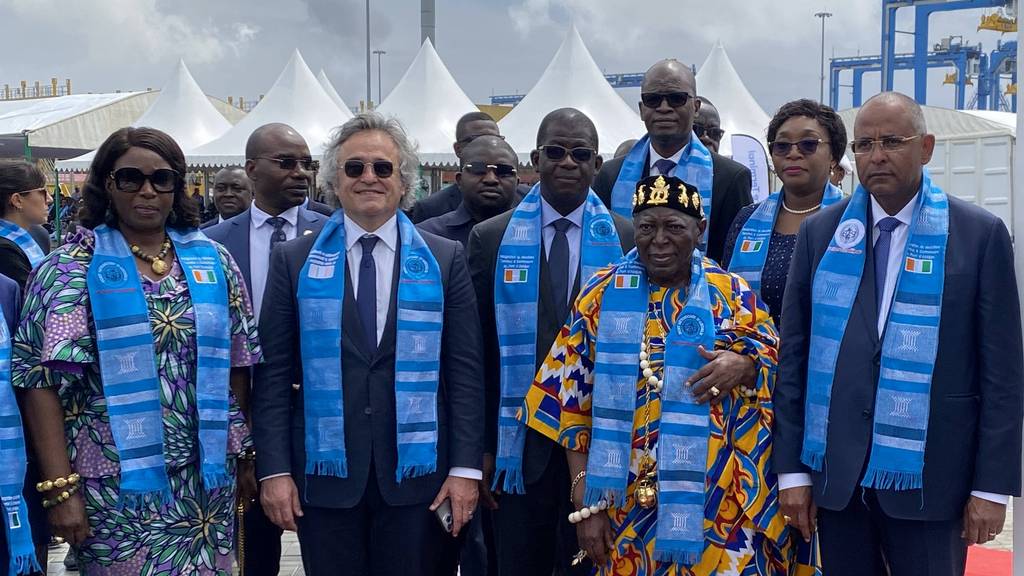 This platform, which is part of the 2030 strategic vision of the Ivorian authorities, aims to provide Côte d'Ivoire with a high-performance tool serving as a port hub connected to Bolloré Africa Logistics’ multimodal logistics network (sea, rail, road). It will also allow us the company to offer adapted solutions to shipowners, shippers and freight forwarding agents for the import, export and transit of goods, from and to Côte d'Ivoire.

Managing Director of the Autonomous Port of Abidjan

We are proud of the completion of this important project which is part of the strategic plan to modernise the infrastructure of the port of Abidjan. This new terminal will contribute to the long-term repositioning of the Port of Abidjan as a key logistics platform on the West African coast.

We are delighted with the completion of this major project which reflects the commitment made by Côte d'Ivoire Terminal to increase volumes and boost import and export flows in Côte d'Ivoire and West Africa. This new infrastructure, equipped with the latest innovations, perfectly showcases our commitment to the development of port activities in Africa.

Together with our co-shareholder Bolloré Ports, we are providing the Port of Abidjan with an infrastructure that meets international standards and is designed to accommodate the latest generation of vessels. Its commissioning will redistribute incoming and outgoing flows to the port of Abidjan, develop a transhipment platform and offer a new connection and highly competitive services to shipowners.

About the Autonomous Port of Abidjan

Considered the lungs of the Ivorian economy, the port of Abidjan handles 75% of trade between Côte d'Ivoire and the outside world and accounts for more than 76% of customs revenue. It houses 50% of the largest industrial units in Côte d'Ivoire and generates around 55,000 direct and indirect jobs.
The port of Abidjan offers quality services to vessels calling at its facilities. Its large reception capacity and its strategic geographical position allow it to play a leading role on the Atlantic Coast of Africa.
To strengthen its position as the leading port on the Atlantic Coast of Africa, several projects have been initiated by the Port Authority. These include the widening and deepening of the Vridi Channel entrance, which was completed and inaugurated in February 2019, the construction of a second container terminal, whose superstructure works began in October 2020, the modernisation of the fishing terminal and the creation of industrial land by filling in the Vridi-Biétry bay, with 40 hectares completed. In addition, there are projects for the construction of Ro-Ro terminals, which were commissioned in 2018, a cereal terminal, for which work began in January 2020, a mineral terminal, which is awaiting financing, and finally the construction of a logistics zone on the Northern Motorway.

In addition, the Autonomous Port of Abidjan is certified ISO 9001:2015 for the quality of its services and ISO 14001:2015 for the environment. Also, all its facilities are in compliance with the requirements of the ISPS Code.

Following an international call for tenders, the Bolloré Ports and APM Terminals consortium was awarded the contract to build and manage the second container terminal at the Port of Abidjan. With an area of 37.5 hectares, this new terminal will be equipped to handle more than 1.5 million TEU containers per year and will accommodate vessels with draughts of up to 16 metres along 1,100 metres of quays. It will also generate 450 direct jobs and thousands of indirect jobs. It will therefore contribute to skill development and to training for young Ivorian people in port operations.