Friday April 10th, Bolloré Logistics received 333 m3 of medical equipment at Paris-Charles de Gaulle Airport coming from China, after a stopover in Doha, Qatar. The company’s chartered plane, a Qatar Airways Cargo Boeing 777 freighter, also had on board products from several industries. This successful operation was made possible thanks to the mobilisation of Groupe ADP, Bolloré Logistics and Qatar Airways Cargo. 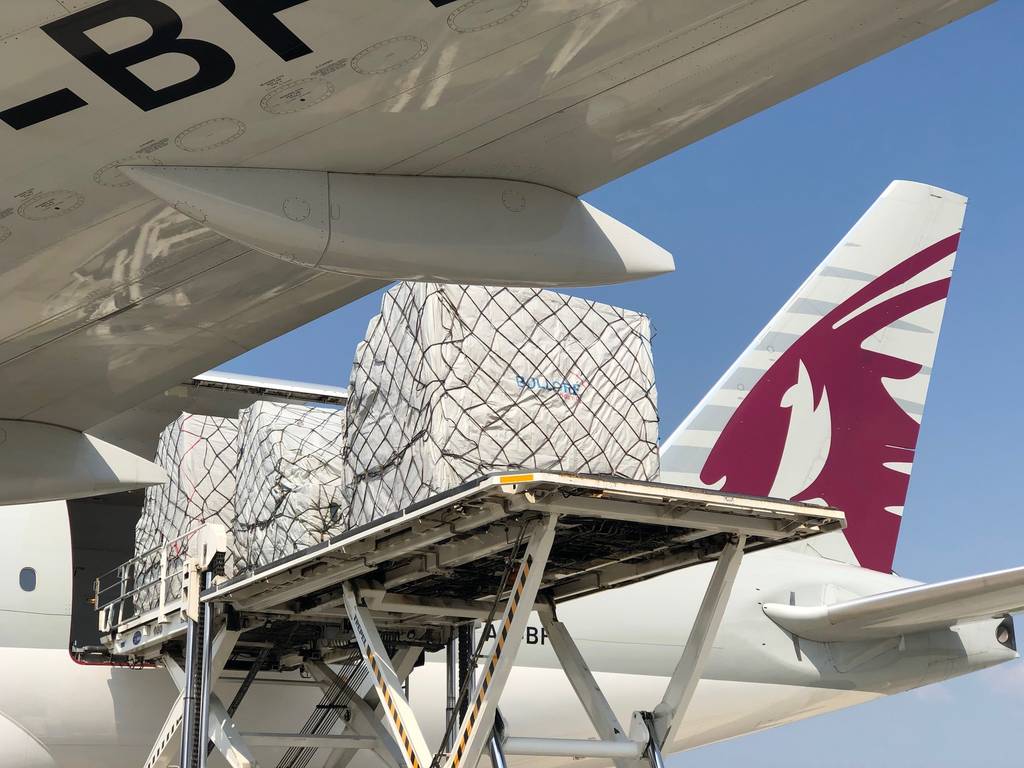 Since the beginning of the crisis, Bolloré Logistics, a world leader in the supply chain management sector, has played an active role in continuing to serve its customers and minimizing the impacts on supply chains. In its Paris-Charles de Gaulle hub, France’s leading airline hub with more than 100.000 tons of freight handled in 2019, a crisis unit has been created to respond to emergency needs. It provides for each shipment an alternative transport plan combining flexibility and speed of execution by relying on its international network covering 107 countries. Connected to all international Airports, the Paris-Charles de Gaulle hub enjoys a strategic location with direct access to runways. In 2019, a fith cell of 6.000 sq.m was built, bringing the surface area to 33.000 sq.m.

We are happy to join other players at Paris Charles-de-Gaulle Airport to ease the transportation of pharmaceutical products and protection masks, aimed to be distributed in all the France's regions. We also thank the French Customs as well as our partners Groupe ADP and Qatar Airways for their support and the trust in us. The Bolloré Logistics whole network is involved to provide scalable solutions and helps clients to face this crisis.

On its side, Qatar Airways Cargo is operating a large number of Boeing 777 freighters with a capacity of 100 tonnes each between China and France for its customers with the first freighter having commenced on 8 April. The freighters originate from Guangzhou and Shanghai and serve as an air bridge to France, delivering essential cargo and humanitarian aid. The cargo carrier has partnered with the French Embassy in Doha to support the French government and French Ministry of Health in their fight against the deadly pandemic.

Air freight plays a critical role in the global response to the COVID-19 crisis and has become the lifeline of the world. We are honored to be able to support France with a special flight operated by a crew of French nationals.

For its part, Groupe ADP, which operates with Paris-Charles de Gaulle the leading European airport for cargo - with 2.2 million tonnes of freight and posts handled in 2019, 300 ha in one piece and 700.000 sq.m cargo facilities with direct access to the runways - has been strongly mobilised since the start of the crisis with all the players in the sector (Customs and Civil Aviation departments, freight forwarders, handlers, integrators and companies to ensure the continuity of air freight, and therefore the maintenance of an essential economic activity for the country.

We want to thanks all our partners and especially the DGAC (Directorate General of Civil Aviation) which has in particular enabled optimal use of the slots usually devoted to passenger flights for the exclusive transport of goods, and several companies operating at the airport have thus been able to reassign their passenger planes as "ferry" planes "in which the entire hold is now used to transport goods.

Consequently, while the fall in air traffic has hit passenger transport hard, the cargo activities in the current context demonstrate exceptional resilience.

Bolloré Logistics, a brand of Bolloré Transport & Logistics, is a global leader in supply chain management ranking among the world’s top 10 in transport and logistics with an integrated network of 609 offices in 107 countries.

Group ADP develops and operates airport platforms, including Paris-Charles de Gaulle, Paris-Orly and Paris-Le Bourget. In 2019, the group welcomed, under its Paris Aéroport brand, more than 108 million passengers on Paris-Charles de Gaulle and Paris-Orly, 2.2 million tonnes of freight and mail and nearly 127 million passengers through of airports managed abroad. Benefiting from an exceptional geographic location and a strong catchment area, the group pursues a strategy of developing its reception capacities and improving its quality of services and intends to develop businesses and real estate. In 2019,the group's turnover amounted to 4,700 million euros and net profit to 588 million euros.